Incidence in the world:
Female breast cancer is by far the most frequently diagnosed malignancy, accounting for about 29% of all oncological diagnoses in women. The risk of having a breast cancer diagnosis over a lifetime is one in eight women. It is estimated that in Italy over 47,000 cases are diagnosed each

year. The incidence presents some differences between geographical areas with higher levels in the central-northern areas and lower in the South. It is the leading cause of cancer mortality and represents 17% of all cancer deaths among Italian women. Breast cancer shows high levels of survival, around 85% at 5 years after diagnosis. The most recent AIRTUM estimates indicate that in Italy 522,235 women had a diagnosis of breast cancer during their lifetime.
Application technique of Linfotaping Bellia System after mastectomy
The body surface covered by kinesiological taping forms convolutions in the skin that increase interstitial space and, by reducing the pressure, allow the lymphatic and blood system to freely drain fluids. Thus a “flywheel” of actions is created which allow the body to heal itself biomechanically.

This image is the property of prof. Bellia Rosario

Check if this image has copyright restrictions before publishing it
Mechanisms of action of linfotaping:
A) The first action is given by the skin that is raised, the space that is created reduces the
interstitial pressure and a lymphatic flow is activated towards the area where the pressure has been reduced.

B) The second action is achieved through body movement, the tape lifting the skin in an
undulatory manner amplifies the stretching / contraction effect. The adhesions of the connective tissue are therefore reduced obtaining an improved smoothness of the filaments between the interstitial cells, of the endothelium, of the lymphangs and the fibers of the connective tissue. Thus the doors of the lymphatic vessels are more easily opened and the sap flows more quickly.

C) The third action is the conductor function of the tape. A liquid has the property of moving into certain guide rails. The tape provides a faster conduction of the sap along the conduction structures in the desired direction.
Contraindications to the application of elastic adhesive taping:
1) irritated or damaged skin
2) ascertained allergy to “acrylic glue”
3) non-technical diagnosis
4) “serious” diseases, of uncertain diagnosis
5) In the raised floors
6) Thrombosis risk
“Physical” treatment of edema
1) Attack phase: lymphatic drainage massage, followed by 10 minutes rest in a sloping position and restraint, which will then be accompanied by kinesiological taping (10 to 30 days);
2) Maintenance phase: it must be adapted to the clinical process of the patient: it passes to the elastic brace (usually 2nd or 3rd compression class)
3) Phase of absence of the therapist: the patient must be able to self-manage having learned all the rules of hygiene, habits and rules of use of restraint. The patient must not become an addicted physiotherapist.
Schematically, the lymph-taping determines the following effects:
a) increase in the speed of venous-lymphatic flow: determined by the tape in the area below with the movement of the fluids, a distension of the vessels; the overall effect is an increase in blood flow velocity within the venous vessels and lymphatic outflow.
b) biochemical effects: the forces of tension and stretching that are generated in the area subjected to the application of lympho-taping contribute to reducing tissue inflammation.

c) effects on edema: the decompression caused by lympho-taping is transmitted to the subcutaneous tissues, causing an increase in interstitial pressure; this modifies the transmural pressure causing a reduction in the filtration and an increase in the reabsorption of both the lymphatic capillary and the venular side.
It is important to emphasize that the chosen technique will be related to the conditions of each individual patient.
Global decongestant treatment:
We recommend the synergic association of the different methods in order to obtain the best possible result for the patient:
a) manual lymph drainage (DLM)
b) follow-up pneumatic pressotherapy
c) multi-layer bandage (multi-component) or short elasticity
d) specific kinesiological lympho-taping
e) selective joint mobilization exercises
f) sectorial toning exercises (isotonic).
g) adequate diet.
Lympho-taping technique with insufficient lymph node function or missing lymph nodes after surgical removal
If the lymphatic flow is blocked, for example after a resection of the lymph nodes, the lymph will
be diverted with the help of the tape towards the next or alternative functioning lymph node
station.
Method – mobilization of liquids: with “ballistic feedback – recoil effect” technique:
The base of the fans, of a size suitable for the bandaging area, will be positioned proximally (furthest from the heart) while the wings will be distal in direction with a 45 ° inclination and with a belt tension of about 10-30%, with position in lengthening of the zone to be bandaged. We will have a tissue action that we can define as “retroaction or recoil effect”: the tape will lift the skin by means of the elastic action that goes from the wings towards the base, this will facilitate the “sliding” of the sap in the opposite direction, that is towards the heart, therefore with a pushing action towards

the following lymphatic station. This technique is indicated for emo-lymphatic drainage in subjects who do not have full-blown lymphatic disorders and who have a good chance of movement The tape will produce an action similar to the therapist’s hand while performing the lymphatic drainage massage. With the application of the tape the draining lymphatic facilitation will be activated by the general body movement, following the three-dimensional trend of the “fascial” structure. This technique is less effective in patients with poor body mobility.

Escape routes or alternative lymphatic drainage of the upper limb after mastectomy.
The so-called “collateral routes” or “alternative routes” are decisive in the management of lymphedemas characterized by a mechanical obstacle or ablation of lymph glandular stations:
• The way of Mascagni (in the deltoid area)
• The way to Caplan (in the triceps area)
• The anterior and posterior transthoracic pathway
• The inguino-axillary way

• The suprapubic route
• The intergluteal pathway.

Conclusions and considerations on specific aspects:
a) rules of application


Hi, this is a comment.
To get started with moderating, editing, and deleting comments, please visit the Comments screen in the dashboard.
Commenter avatars come from Gravatar.


Leave a Reply to A WordPress Commenter Cancel reply

Popurlaly known as ‘jannu bhai’, the Late manishi’s vision, farsightedness and sacrifice have enabled us reach the stature we enjoy today More..

It gives me immense pleasure to learn that the 1st volume of international journal of physiotherapy and cancer rehabilitation is being More.. 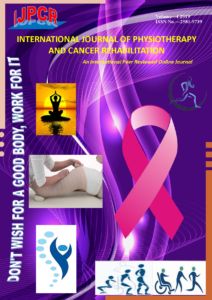